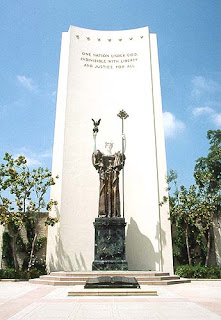 I know that's an odd title, but I think it's true.

The Chinese have a great saying that puts everything into perspective:

Think about that. It's effectively true. For the vast majority of people on Earth, their time here is nothing more than a blink of the eye and then they're gone. Poof. Dust. Forgotten.

Unless they write a blog.

I suspect that, 1000 years from now, your blogged words, thoughts, ideas, rants and tirades will, somehow, somewhere, still be stored in the Googleplex, or on the Internet (or it's equivalent) and accessible. Effectively the only thing left of you long after you're dead and gone.

I doubt anything else you do with your life will have that kind of personal staying power. Maybe if you write a book or record a song, but that's not something the average person does. The only other thing that might be really equal in representing you, and what is uniquely you is the DNA you pass on to your children.

Even then, your thoughts via blog are more personal, public and representative of you when you were alive and spewing energy into the void.

I've always known whatever I wrote here was available to anyone, anywhere. What I didn't think about before was that also means anytime. Now, or 1000 years from now.

This stuff isn't going away anymore. The internet saves everything somewhere.

I'm sure you've all thought of this already and you're doing the 'so what'. Still, the TIME aspect and what that means to a human with a deterministically short (<100 years) existence never really sunk in until recently.

I agree, blogs will all that will be left. Along with our Newtons, Apple Electronic Media Lab stuff, BBS's. :)