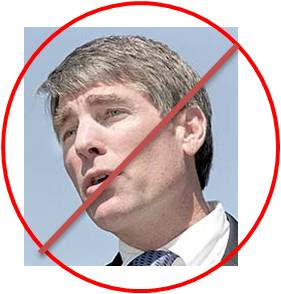 I haven't been writing much about politics of late but I just found out that the congressman for my area here in Boulder, Democrat (?) Mark Udall, voted against the McGovern Bill to get us out of Iraq. One of 59 democrats to do so. And one of only 13 in districts that carried Kerry in 2004. From the CommonDreams.org blog:

Thursday the House voted on a slightly revised version of the McGovern bill. It would have mandated the beginning of withdrawal (”redeployment”) of U.S. forces from Iraq within 90 days and completion of the withdrawal (”redeployment”) of most U.S. forces from Iraq within 180 days after thatThe bill was defeated 171-255. 59 Democrats joined almost all Republicans in voting no.

I think it's pretty clear to everyone who's been paying attention to all the facts that as far as the Iraq War is concerned, this is one dog that just won't hunt.

I'm not a Democrat (or a Republican), I'm a Libertarian Hippie. I'm liberal on some things, conservative on others. But I'm no fool. The fact is, all of my left leaning friends are against this war. Interestingly, most of my right leaning friends (if you draw them out) are as well. All you have to do is look objectively at the facts (which have been clearly articulated in many other places so I won't repeat them here).

I think Udall needs a good whack upside the head. I think a primary challenge for Mr. Udall might be in order.

The amount of money spent on this war (around $450 billion, so far) could have funded education, healthcare, budget imbalances and a dozen other more worthy causes. And then there's the over 3000 dead American solders (with the death toll going up daily). with 10's of thousands more crippled for life.

For what, exactly? I'm generally not dense, but I cannot see why we're doing this.

If you live in the 2nd district in Colorado, email Udall. Tell him you're PO'd. Hell, email him if you don't live here.

Yes. A primary challenge, especially for the 13 democrats in districts that went Kerry in 2008. Something to be considered very seriously.
at May 12, 2007