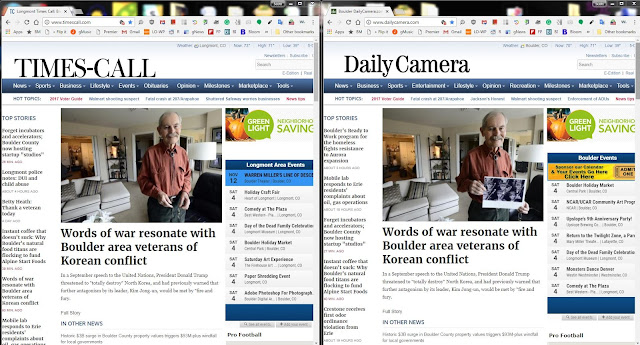 Longmont and Boulder:  Very different towns.  However, our for-profit local newspaper chain seems to think it's the same town, and we won't notice, so they just reuse the same content.  Over and over.

This isn't community news and information media, it's an advertising container.

However, it's also the reason we started the Longmont Observer.

The Times-Call, our local newspaper, turned off commenting- this is not a good thing

Some of our readers at the Longmont Observer, recently, pointed out to us that The Longmont Times-Call, owned by Alden Global has made the decision to turn off commenting by readers for its entire site.  They referenced this article: Times-Call ends story commenting.

The Times-Call, a Digitial First Media Corporation property, states that "Commenting on stories, while a sound idea in principle, presents a host of challenges for us and we simply do not have the tools or adequate resources to ensure story commenting provides positive value to our readers."

They go on to say: "The majority of the time, the comments are dominated by a small group of people, most posting anonymously, and who, frankly, tend to simply shout down or ridicule any opposing view. Commonly, our comments sections are filled with vitriol, personal attacks, profanity, and angry and hateful speech — and worse, unfortunately."

Many news outlets in America, and across the world, have moved the conversation from local media outlets to the large social platforms like Facebook and Twitter.  The thinking has been they create a barrier that raises the bar by creating helpful friction in the process that, in theory, would produce a more restrained and thoughtful commentary.  Others, especially over the last couple of years, agree that places like Facebook offer a massive space, but, are not always a place for intelligent discourse.
What appears to be happening with social media is a significant portion of people are behaving irresponsibly and writing without thinking of the consequences their messages have.  Often, these people hijack public discourse and set, even control, the tone of the discussion.

That, apparently, has now happened to the Longmont Times-Call.

In addition, most sites that have commenting only see a small percentage of their readers actually sign up and participate in the comment sections.  Sections that require, often, significant resources to moderate from already struggling news media entities and their constantly shrinking staffs.

The news, today, is no longer concentrated and fed to a city by a single source anymore.  The local newspaper used to be a quasi-monopoly on how people found out what was going on in their town and determining what was important and what would be ignored.  People were willing to pay for that news.

Those times are no more.

We still pay for it, make no mistake about that, but it's distributed among several players now.  The average person pays on average $50-100 a month for their internet service at home.  Another $50 a month for your cell phone and it's data service.  With that comes access to 'free' information and news.

What we forget is we pay for 'free' services like Facebook, Twitter, and Google.  What also forget is that, when a service is free to us, we become the product.  My Friend Dennis Dube, when the iPad first came out said to me, quite insightfully "oh look, a screen attached to your credit card'.

We pay with our personal information.  It's collected and sold, as highly focused advertising, to sell us things.  From cars to politicians to, it now seems, social contracts on how to behave.

Those advertising dollars used to go to that local newspaper.  The old Times-Call building in Longmont had, at it's prime, 200 plus employee's, creating a well informed daily record of our lives in Longmont.

The small, personal and sometimes even petty is now relegated to the short sound bites of Twitter or the cloistered bubbles and echo chambers we create for ourselves on Facebook.

The question then becomes where to turn to find out what's really happening in your town?  Who's paying attention to what's going on at St. Vrain Valley Schools?  Who's digging into that tip about the troubled kid's facility going up on the west side?  Who's asking about things like police misconduct?  And who's talking to local businesses to find out what's available to people in our town?  What kinds of local goods and services do we have in Longmont now?  And what's happening with issues like the train noise on the East side?

I like to think we're taking a shot at it with the Longmont Observer.  We're doing our best as a non-profit supported solely by the goodwill of the institutions, businesses, and residents of Longmont, but it's going to be a difficult road.

Competing with the locked in costs of internet and cell phone bills, and the well-crafted game theory used to manipulate people to come back, over and over, to their social network profiles, maybe something that no one can overcome.

Let's hope not.  Let's hope that we can keep a level of local independence and local engagement by people who live in our town(s) by creating and supporting things like the Longmont Observer.