I first saw this film in 1988 when I was working at Apple. It was supposed to knock out our assumptions about how to think of scale and how to 'think different' in addressing new problems.

I know this is old hat for many of you (it's been around forever), but it's still worth watching every year or two just to put things into perspective.

Interestingly, the version we saw didn't say anywhere that it was made for IBM. This is the first time I've seen that bit of info. I'm betting, back then, when IBM was still a real competitor to Apple, we'd have seen it was originally made for IBM and either ignored it, or it would have scared the hell out of us.

I'm almost (but not quite) speechless.

Someone is actually selling empty Macintosh computer boxes on Craiglist.

We have fourteen 24" iMac boxes in like new condition with styrofoam inserts available. 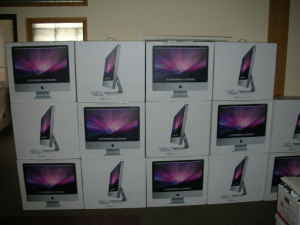 Can you imagine someone doing this with Dell boxes? I don't know what I find more outrageous, someone posting this or the thought that someone might actually buy these off of them.

This is pretty amazing. A real fight club in Silicon Valley that pre-dated the movie.

Wonder if we'll get one of these in happening in politically correct Boulder.
at May 01, 2008 No comments: