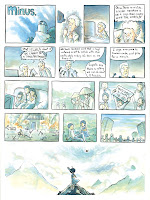 Frakking DO something
at November 15, 2008 No comments:

Some newly found/never before seen WWII footage discovered in Denver recently. It's Black and White.. no sound, but still interesting. I've always loved old movie reels and this feels like the raw material before it's cut down to 3 minutes for the reel they used to show before feature films in theatres (before that new fangled thing had come into being... TV). It's a little like having one of those old C dish's (10 feet across) that got the full raw news feeds from around the world.. but over half a century ago.

My Dad was in WWII (barely... he was 17 when he joined and it was the last year of the war) and he's got some pretty interesting stories about Japan after the surrender. I think this was the last time the world, as a whole, had to sacrifice and work together.
at November 10, 2008 No comments: