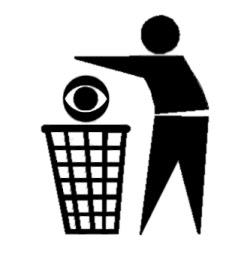 I can't really think of any other explaination for what happened at CBS.

Apparently, McCain pulled a blooper during a CBS news interview by mixing up his timelines around 'The Surge' in Iraq which is actually a big story in itself (since he seems to be basing all his credibility on it) but the real story, for me, was how CBS, effectively, covered up the mistake.

Thank god for MSNBC madman (corporate newsroom speak for 'TruthSayer') Keith Oberman. He took the original footage, and the modified footage and played them side by side. Here's the Clip:

Of course, this is getting a much larger audience on the internet then when it was aired on MSNBC. If you want the facts, on demand, the internet is the place to go.

This isn't about McCain, I'm not picking on him.

What I'm astounded at is the CBS Evening News changing the content of an interview with a presidential candidate to make him look less foolish when he made a major mistake on camera.

So I have to ask: What's to keep them from doing the same thing in reverse: make McCain, or Obama, look bad.

I mean... why not? Where's the rule book that says 'you can change the content of an interview to make a presidential candidate seem better, but not worse'?

So you can bet they'll be making presidential candidates look bad using fairly blatant manipulation like the clip of CBS's clumsy editing above.

And this means that the main stream media (not just CBS, but all of the majors.... NBC, ABC, CNN, FOX... etc.) get the 'are you bullshitting me again' filter applied. Hell, if CBS is doing it, how can the others NOT be doing it? Even if they aren't, it's what people will think.

I know this because, now, it's what I think. I can't trust what I'm seeing with my own eyes from the big news guys anymore.

When the MSM blows what little credibility it has, that's it.

July 4th and the Declaration of Independence

Although, as Americans, you'd think we'd all have a copy of the Declaration of Independence around, chances are you don't. And if you did, would you read it?

Spend a little over 14 minutes then and at least listen to it.