US and allies to build 'China-free' tech supply chain

And so it begins.

You're watching the beginning of the splitting of the world into two major power centers that aren't that different than what we had before the 1990's with 'communist' Russia, China and their vassal states.

The difference is that it's fascism that's in charge now. China may call itself communist, but it operates just like Stalin's fascist-like extreme version of communism.

And Russia, well, Putin IS Stalin all over again. He's running a mafia state (i.e. fascist state) and has been for over a decade.

The only difference between Hitler's fascist/Nazi Germany and todays fascist states is they're better at handling information in general and the media in particular both inside and outside of their respective spheres of influence. Especially China.

This is going to completely disrupt commerce, politics, education and pretty much everything that's been developed the last 30 years or so that's global in nature. Late stage capitalism is showing it's cracks more and more.

It's also going to fuel a re-charging of the military industrial complex like we haven't seen in decades.

All that's old is new again. 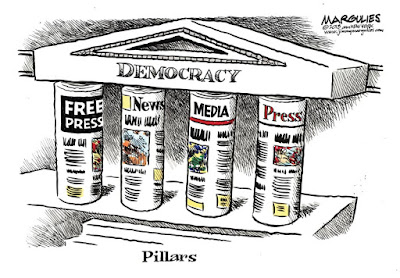 I recently wrote an email to a few colleagues (one an executive at Google, one an executive at McClatchy Newspapers and one to a fellow I've worked on and off with in various media entities over the years). This post is based on that email.Just for fun, I worked out a 'thing' that's been running through my head for a few months now. Particularly the last few weeks with the insanity happening with our government.
It's also obvious that the consolidation of the existing private news infrastructure is more than a little problematic. It's become dangerous to our democracy. The far left publication Jacobin actually did a pretty well reasoned and not too far left in it's analysis of the situation in an article published this week titled "Capitalist Finance Is Incompatible With A Free Press'.

With the Chicago Tribune's publishing company on the verge of being swallowed up by the hedge fund industry, capitalism’s ongoing destruction of the free press through downsizing and asset-stripping has become the number one threat to American democracy.

I believe one of the base issues with the threats to our democracy we see now is a lack of common understanding of what's happening, particularly at a local level, and one of the primary reasons for this is a lack of local news that provides local news, opinion, commentary and investigative reporting as well as connecting local businesses with local consumers.But you know all this. My guess is you've already had these thoughts and, like I just did, run some numbers.When I look at what it would take to create a national network of local news entities, it's not cheap, but, it's not THAT expensive either. Not in todays world where Airb-n-b hit's a $100B valuation on day one.I came up with a cost of around $6.7B a year using a really simple model (simple can be good: occams razor solutions tend to work best).With that money you could put a local virtual newsroom (no office, all online), like the compass experiment, with real staff in each town, focused on that town and building trust in the system in that town.I'll bet that either a private consortium of billionaires with a social conscience, large companies with a guilt complex and government, if we positioned it as a key to how you fix our broken social and political system and was essential to saving our democracy (because it damn well is), could put together that kind of money reasonably easily. Either through commitments they make to support it, or funding an endowment ($115B earning 6% would throw off that much each year).There's about $20 trillion (with a T) sitting, uninvested, right now. $42 trillion in the stock market. All just in the US.Harvard and Yale, between them, have over $70B in endowment funds, for instance. That's just two institutions.I know R-------'s doing a lot along these lines with Google, but, I'm not sure just one company can do something like this and have it be trusted by people. Not in todays 'Big Tech is scary' world. I also think the Compass Experiment* is thinking along these lines, but, I don't think a hedge fund owner with it's tendency toward predatory capitalism will have much interest (or capacity) either.Alternatively, I also think you could fund it by creating a national tax of some sort that we all paid into. It would work out to about $3.58 a month per US worker in the country ($43 a year), assuming about 156M working people (2018 number). That's about what we each pay now for our local public libraries (usually via a tax as well; sales tax in our town. Property tax in many others).Anyway, I know it's a little nuts. I just wanted to get my thoughts down and see if it even made sense to anyone else. Feel free to ignore this if you think it's too out there.
A quick spreadsheet on what the economics might look like.
Note: everyone did respond and the conversation is ongoing.
I also, still, think the idea of creating a Library Information District that includes a newsroom built into the new 21st century Public Library, is more than a little viable.
It's titled We Need A New Kind Of Local Community Funded Newspaper - At The Public Library
*Shortly after writing this to them, the Compass Experiment (a collaboration between McClatchy and Google) was disbanded. Apparently, the new hedge fund owners of McClatchy don't like Google and killed off the partnership.
at February 21, 2021 No comments:

had to put this somewhere so I wouldn't lose it