My personal version of TV's future

Soooo.... what is a home theater/video viewing system today anyway?

Is it a 27" Sony Trinitron with a a bulky 5 speaker surround sound system and a DVD player and a $79 a month cable bill?

Here's my own personal version of the video future. I designed it just for me to be a sort of video cocoon. 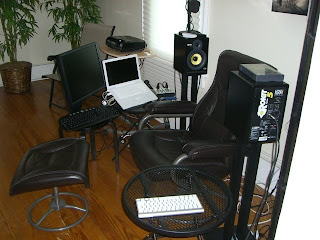 What do I get? a 10 foot screen that looks pretty good during the day and is just short of mind blowing when it's dark. If I wanted to, I could block the windows during the day, but what's the point when I only really watch TV and movies at night.

I also have two recording studio quality speakers 2 feet from my head on either side. Sound doesn't get much better than that.

The laptop can be anything. This is a Mac, but a dual core HP is $549 on sale at BestBuy right now. And you can play some awesome games you can't using a 'traditional' home theater setup. (note the Quake 4 Arena box on top of the speaker in the forefront of the picture- 10' of violent gore with the equivlent of 15 lb headphones blowing out your ears: Priceless). And, of course, all laptops play DVD's now, gratis. Need I even mention P2P/Bittorrent?

In the next 9 months you'll see things like this: 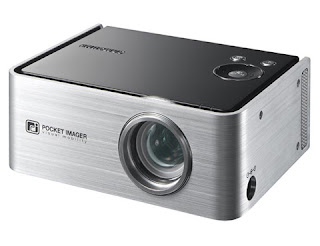 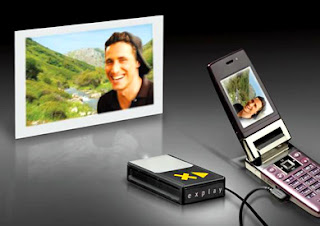 These aren't mock ups. This stuff is real. The tiny projectors are supposed to come in later this year for around $300 and project 2000 lumens (my 'big' one does 2200 lumens) on a screen size up to 8 feet across.

So, I look at this setup, and what's coming around the corner and I have to wonder how long before the movie theaters just seize up and go out of business. (other than the ones that get that movie going can be a social thing.. but they are few and far between).

I also have to wonder if the video distributers of today like CableCo/MSOs and Satellite TV providers have a chance.

Mix all this with services like my own Medioh and others like Hulu, Joost and Veoh, not to mention all the networks doing their own internet offerings (and things like South Park putting EVERY episode ever made online, free), well, whats the point of paying for cable?

Who's going to stop the Major Motion Picture studios from doing what SouthPark is doing? Why, if you're creating a great show like, say, FireFly, do you have to worry about 'getting cancelled' if you can put the show on the internet, charge for access (or give it away free with commercials), bring in LESS money but KEEP more of it? I mean, why wouldn't you do that? Why keep supporting the gatekeepers when you can free your content for more people (and more net income for your company?) 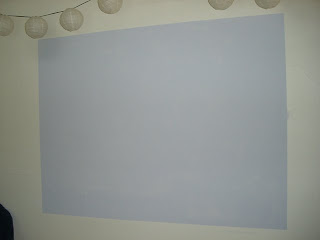 Oh...The Screen: I simply painted a nice big 'sliver screen' on the wall. Cost of $20 (of which I only used about $3 worth) of 'Silver Screen' colored paint from Home Depot. And yes, that picture shows just what it looks like: A big square painted on the wall. Nothing more needed.

And this is about the most I could spend to do this. Everyone I know already has a computer (usually a laptop). Few need the sound system levels I like (although at $300 total, why not?), so, in reality, all you need is your existing internet connection and that $650 projecter and you're set.

I talk to my developers (really anyone under 25) and none of them own a standard television set. They use, yep, their computers.

This isn't just a trend, it's where everything's going.

Yes, there are likely to be people that want a TV in the kitchen while cooking dinner, but why not just plop down your laptop on the counter (wireless, battery, no cables) and watch it there? I do. Why NOT you?

This will take time of course. Games, like Rock Band, are still tied to consoles. And innovations like the Wii will take time to migrate to a laptop (Wii like controls? hmmm.. maybe not that long).

However....I still think internet access with low cost projectors and laptops (or just the laptops or any other 'internet enable device with a screen') are going to be more than a simple and easy way to replace your TV and cable bill, they're the real future of TV. Passive AND interactive.
at April 03, 2008