OLPRC One Laptop Per (Rich) Child 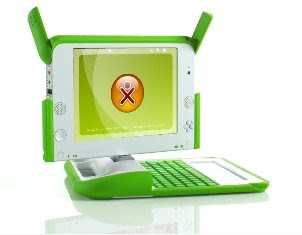 Saw this in today's The Inquirer (no, that not that one). Seems Negroponte, the visionary behind the One Laptop Per Child project is going Windows on the OLPC.

IN A SOMEWHAT shocking revelation, One Laptop Per Child has said that they might dump Linux from their XO laptops in favour of the Vole’s Windows XP. The seeming surrender to the evil corporate world comes just a day after the company’s president tendered his resignation.

OLPC, the educational project which purportedly aims to provide small, cheap laptops for kids has, since its inception, been running its home-made Sugar application, run on Linux, but on Tuesday, OLPC chairman and founder, Nicholas Negroponte, told AP that this was all about to change.

In an attack on pro open saucers, Negroponte slammed “the fundamentalism in some of the open-source community" and reckoned that by pushing the free, open-sauce software on OLPC XOs, the company was scaring people away. "One can be an open-source advocate without being an open-source fundamentalist" he snarled.

I completely get his comment on open-source fundamentalism. The pure Linux crowd can get a little overbearing at times, but dumping it? I'm not sure that makes much sense.

Putting Windows XP on the OLPC means they'll have to at least double the 1GB of disk space to 2GB (minimum). Not much, granted, but it's going to up the price of the $100 (umm.. I mean.. $200) laptop even more. Keeping a Linux based machine allows them flexibility in their pricing they'll lose with an XP only OLPC.

I have nothing against XP. I have it running on all my computers (PC's and Mac's) along side Linux (yes, I do indeed triple boot all my personal machines). I like the option of using different OS's for different things and XP is, by all accounts, stable and ubiquitous. Good traits in an OS.

But dumping Linux because of perceived fundamentalism is a mistake. Maybe he'll shake out the Linux bigots from the OLPC project (their president and head of software just quit.. most likely because Nick wants to add XP to the mix), and that may be a good strategic move, but I sure as hell wouldn't dump Linux outright.

Even Dell gives the option of a Linux install on their PC's.

I'm sorry to say that the OLPC project may well be on it's last legs. They have raised the awareness of the need (and market) for low end PC's. Intel's Classroom PC, the ASUS notebook and others would most likely never have come about had it not been for the OLPC vision, but the original, as is often the case, is likely to lose in this battle.

Negroponte, an academic by training and nature, just doesn't understand the world of business (and as much as he'd like this to be solely a 'movement' and not a business.. it's sure as hell a business). Anything that threatens the markets of, be they existing or new greenfields, the existing PC and OS makers is going to be viewed by them as a business. Too bad Negroponte can't seem to adapt to that reality.

That said, I've got a used Linux based OLPC for sale.