The OLPC (One Laptop Per Child) XO Arrives 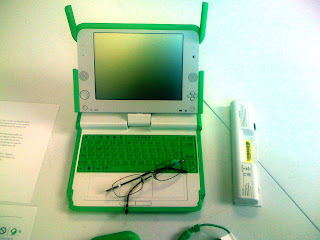 The OLPC (One Laptop Per Child) XO computer arrived on Sat.

I participated in the Give 1 Get 1 program in mid November (title pretty much describes it). You can still do this yourself before Dec. 31st and I would urge you to do so.

If you wonder whether or not it's going to fly, give this article a read on what it's doing right now in Peru.

My initial impression after taking it out of the box was 'wow... this thing is small, and it looks like a toy'.

After spending a day with it, it ain't no toy. This is a full fledged linux laptop.

I think it might give Amazon's book reader (Kindle) a run for it's money as well. It's unique design lets you fold it over and use it as a book.

It's interface (specially created for the XO, called 'Sugar') is very intuitive and simple to figure out by simple poking around.

I'm going to apply for a developer key on Wends and we'll see what's really under the hood in the new year. 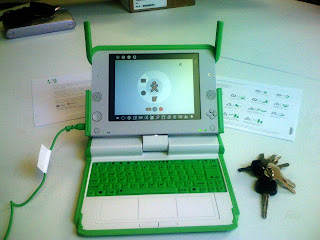 Next to my keys. 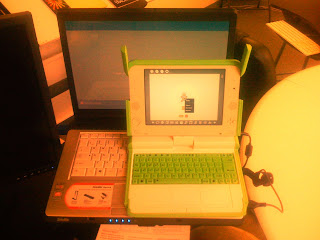 When I first got into computers back in the early 80's, I had the thought that wouldn't it be wonderful if every man, women and child could get access to a computer. I remember seeing my first Macintosh in 1984 and thinking: this is what people need. I had a similar reaction when I started playing with the XO.

It's not a power user computer, but it is every bit the every person computer I've been hoping would appear for the last 25 years. Hats off to Negroponte and the folks at the OLPC project.
at December 24, 2007