Legalese a the end of your email? Think about getting rid of it. 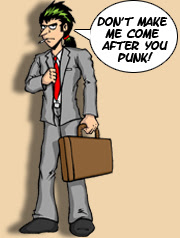 I periodically get a sales solicitation from a company trying to sell us something. It's usually a cold call type email to see if we're interested in Indian software development services, CDN's or co-location services. These guys do one thing that really turns me off.

They put what looks like (but isn't) a legal contract (but it's just a legal sounding statement) at the end of their email signature. Like this one:


Hard to read isn't it? Small type, dim on the page.

Doesn't this bug you? Especially if it's from a smaller company (vs., say, AT&T).

Doesn't it make you slightly irritable? Make you think: why does this company put legal language in an initial solicitation email? Do they have so much business (or funding) their lawyers review how emails are signed?

And what's with 'this email is intended only for the person or entity to which it is addressed....'

I get it if the emails are legal discussions (such as two CEO's negotiating the sale of asset between companies). But an initial sales call email? I think: asinine.

I've decided that company's that open their initial contacts with me punctuating their emails with a slightly threatening piece of legalese at the end and that has the word 'prohibited' in it, anywhere, get's put on my SPAM list.
at January 10, 2008

I dont really get the point. I am not a lawyer but how can anyone that sends me a message to my server bind me to some sort of confidentiality by merely putting a disclaimer in the email? That cant possibly be binding unless you are held by some sort of real outside contract with that person.

Jim, I agree, and that's largely the issue. It's pointless and irritating that it's there (LOOKS legal, so, damnit, now I feel, to make sure I'm not walking into anything, I have to read it).

I also get a lot of e-mails like this and frankly it often seems like grand standing on the part of people trying to come across as impressive.

In an initial pitch e-mail I would want to be as welcoming as possible and encourage my recipient to pass the note around if they like what they see, rather than try and block someone in with heavy sounding BS.

I also really enjoy your blog. I'm recently new to the start up world after many years in corporate world so its refreshing to come across someone who has made the switch after plenty of war wounds in the 'old world'.

If I had a $1 for every twenty something startup exec who thinks I spent too much time in corporate etc.....