My friend, the Chief Deputy 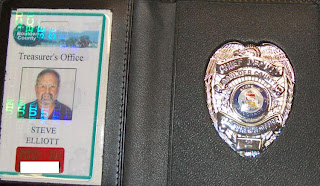 Steve Elliott and I go way back. He hired me as the sysop 0f the AMOS users group back in the late 70's/early 80's. (He also fired me, but that's another story).

He has the most cool 'real' title I've seen in a long time. He recently took a new job as the Chief Deputy of the Treasury Office of Boulder County. Not a trendy startup, we're talking the Boulder County Government here.

I know this is the child in me but they gave him a frakkin badge that says Chief Deputy on it.

Says it, right on there: Chief Deputy.

It has a bite as well. He's the guy that can show up at your door and say: "You haven't paid your taxes, I am seizing your property".

That, somehow elevates it from cool to awesome.