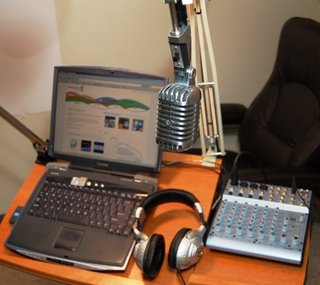 After much investigation, and after talking to our podcasters, here's the setup I've got for podcasting. Pretty simple really and it works beautifully for creating a 'live' type radio show with mulitple inputs and simple clean creation.

It consists of 5 components.

I have to admit, I got this mic because it just plain looks cool. It's a 'retro' design with a modern set of internal electronics.

The mixer is a USB mixer that acts like an external sound card. Why anyone would by a $150 Creative soundcard when they can get something like this for the same cost is beyond me. 8 inputs (including 4 high quality microphone XLR connectors with phantom power for condensor mics, which require power) and a USB connection that feeds straight into the laptop. The beauty of this mixer is it's simplicity. Plug it into your Windows XP computer and it just works. No drivers to install, nothing. And the ClickCaster website just automatically recognized it as the main audio driver and worked. I didn't touch a thing.

You plug in the mic to the mixer, bring up ClickCaster, hit record and go. To play music, you just launch Winamp or MediaPlayer and play your songs. They route through the USB Mixer, just like the Mic, so you can talk over the music very easily.

So, you just hit record on ClickCaster, have your playlist ready on Winamp, and off you go. Do it just like live radio. Plug in additional mics if you have buddies you'd like to include in your show and it all just works.

Once you finish recording (which, again, is one click.. 'record'), you hit the stop button (ohhh.. two clicks!) and type in some show notes on what your episode was about (people on the show, music you played, whatever you like). Throw in some pictures to the show notes while you're at it.. hmm... nice.. looks good.

And now, the third, and final CLICK. Hit publish. Ahh... it does ask one last time if I want to save a copy on my personal computer.. yes.. click yes.

I'm done! It's encoding MP3 onto my machine... then, once it's done with that, it uploades the file to ClickCasters servers and I'm done. I've got a fully formated and subscribable podcast published on the internet.