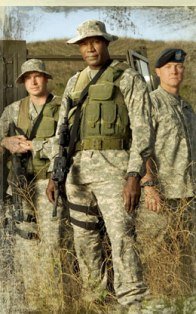 Ever watch The Unit TV show?

And a Bush Administration dream.

The premise: An elite army unit that reports only the President of the United States. It goes where it's told to go. Does whatever it's told to do. Ignores all laws (operating inside 'enemy' lines or US borders, using whatever means necessary to protect our country, legal or illegal). The wives (about 30% of the on air time/dialog) is all about supporting the guys. Sticking together. Making it work. Sucking it up and taking it cause, hey, they're holding the line for all of us.

You know, I don't even disagree with this. There ARE forces out to get us. I'm alot more careful about travel out of the US now than I was before 9/11 and the Iraqi war. Amercia is 'on top' and the top dog is always targeted by the rest of the dogs. Ask Bill Gates.

But, I've got t ask, is a TV show about an elite group of Army operatives particularly adept at a (very) wide range of destruction (which admitely always ends in 'good things' like hostages being freed, bad guys planning mass destruction being cut down and other horrible things being stopped dead in it's tracks) a good thing to have running around without any kind of check or balance?

When a group of people, empowered by the single most powerful person in the world, have the power to act 'on the spot' as judge, jury and executioner. and you're spoon fed how good this is and how much we need this kind of protection and all the great things that come from it on prime time TV.. a medium that tends to seep into your brain making things seem ok that are, well, really not ok.. is that good?

Shows like this have just got to be making our current government, with it's penchant for listening in on citizens on a surprisingly massive scale and it's lawyers saying that, regardless of what the law says, the office of The President will do whatever it decides is right to do what it feels is necessary to protect Amercia.

I like that protect Amercia thing. That's good. But I really don't like that a powerful branch of the goverment, some would say the most powerful, feels it doesn't have to obey laws passed by the legal representatives of it's people.

And, yea, The Unit, in it's own kinda sneaky highly entertaining way, helps the Bush Administration make it ok in the public's mind that ignoring the law, it's own law, is OK.
at March 28, 2006

I saw the first episode of The Unit, and found it very interesting in the way it seems to play so well into the hands of the current administration. Most noticebly - the soldier (just doing what was right, of course) being investigated because, before the suspension of (some latin legal term), the actions he allegedly undertook were illegal. Our Boys facing criminal charges for protecting Our Freedom? Well clearly, it's the ancient law that's wrong - better change it! Intersting paralells with recent events... I wonder if this show didn't get a little covert funding from some hush hush government PR agency...