The Fall of the Apple Empire...It's the Little Things

Apple's new Macbook magsafe power connector and it's new commercials:  The beginning of the end. 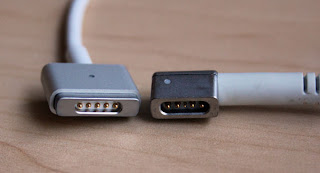 Simple stuff.  The first is the new Magsafe connector for Macbooks.  Here's a quote from the Apple forums on The Verge website:

"The new MagSafe 2 connector sucks. Apple blew it. It's hard to argue that they changed the adapter for the sake of room when the MBA accommodates it fine. This new adapter is quick to pop out when you are using the notebook on a couch, plush chair or somewhere where it can get forced up while in use."


This is a common complaint.  So what does this tell you?  It tells me Apple is getting sloppy, already.  Do you think Steve Jobs would have allowed something that was badly designed to ever leave the lab to be proto-typed let alone ship?  I think not.

Next up are the new Apple Genius ads.


Even Ad Age agrees that Google's advertising is better than Apples.

Think about that:  Google's TV ads are better than Apple's TV ads.  This is just flat out heresy in the marketing world.  Apple, since Jobs return to the company, has consistantly created the best marketing and advertising compaigns, for any product, on the planet.  Now, here we are, months after Steve Job's dies, and Google, a company not known for making brilliant (or even interesting) TV ads, is beating Apple at it's own game.

Do you really think Steve Jobs would have let those genius ads anywhere near a production studio after seeing the pitch for them?  I know that when I first saw them I thought "Apple ad?  Really?  WTF happened?".

So this is how it begins.  The many little things that add up to a really big thing.  The inevitable fall is starting sooner than I thought it would.
at August 10, 2012