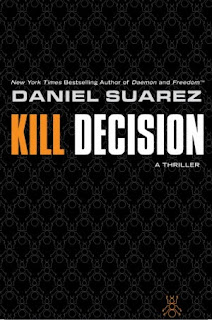 I can't say this is science fiction so much as a near (actually, really near) future war story.  I know a guy in Boulder, CO. that consults for the military creating a specialized Android OS specific to the US Air Force designed to fly, remotely, jets.  As in F18 type jets.  He told me almost 2 years ago about how they had to have autonomous operations if they were cut off from remote control and much of what I read in this book sounds very similar to concepts my friend told me about over lunch at a restaurant on Pearl street in 2010.

So, not so 'near future' as 'tomorrow or the day after' future.

As far as this book is concerned.. exceptionally well written.  He's using a Tom Clancy like style and, for a story like this, it works beautifully.  Fast paced, (reasonably) believable characters and an excellent plot line.  It's also all a bit close to home.  Police forces are considering (and in some municipalities, have already implemented) drone technology similar to what's used in the middle east now by our own military.  What if that were to go a little haywire?  That's what this book is about.  The engineers among you will love it, as will those who just like a good well told fast paced action story.

The only thing that bugs me (and the reason I'd give this a 4 instead of a 5 star rating) is his trick of getting me to buy the 'whole' story twice.  He did this with his first two books (Daemon and Freedom).  It's effectively a clever selling technique to make more money.  He's not exactly serializing the story like the old SciFi guys used to.  He takes a longer story, finds a good break point in the middle, and prints the first book (1/2 the story) at full price, then the second book (finishing the story), also at full price.  You'll notice this book is a little short.  That's because, I'm betting, he's not done (at least, I hope not.  There were some major plot lines left unanswered).

Still, if you like his first two (really one) books, and Tom Clancy's style, you'll love Kill Decision.

If you can't get enough of Daniel Suarez, check out his audio interview at Augmented Reality Dirt Podcast - ardirt{dot}com/12. Also subscribe to﻿ the blog and get the chance to win a free copy of Kill Decision. Daniel Suarez talks more about Kill Decision, Daemon and FreedomTM.