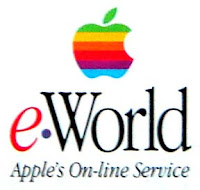 Did you know Apple had a secret lab in Boulder, CO for several years?  Yep.  It was called the AEML (Apple Electronic Media Lab) and it was a part of the eWorld division, basically, it's research group.

I know because I started it and, along with my local proxy (a brilliant guy named Dennis Dube)  ran it for several years.
Why bring this up now you ask?  Well, this weekend, I attended a 20 year reunion party with a few folks from the AEML, but the parties main event was to bring together Roger Fidler and his crew from Knight Ridders IDL (Information Design Lab).

Roger's IDL was the reason I started Apple's secret lab in Boulder in the first place.  I visited him there shortly after he opened his lab and knew, just knew, this was the kind of thing Apple needed to get's it's head around. .  At the time I was the head of R and D for eWorld (Apple's attempt at competing with AOL and other now long gone online services) and believed that the printed mainstream media of the time (primarily newspapers, magazines and books) would translate best to the online world.  This was way before video was possible due to slow bandwidth being the norm.  Hell, it was basically pre-internet (which I date to being born along with the first brower...Mosaic-1993 and it's commercial brother Netscape- 1994).

So I set up the AEML.  I rented the office space across the hall from his offices in the Randolph Building on the corner of Walnut and Broadway in Boulder, CO (Top floor, NW corner looking out on the flatirons and down on Walnut St) and set up our own lab.  One of the things we were trying to nail down was what good is the Newton PDA (Personal Digital Assistant) in a connected online world.  It was handheld, battery powered and it was supposed to fit in your coat pocket.  It was also slow and it wasn't connected to anything.  There was no wifi back then and data over the air was a Motorola engineers wet dream, but little more. 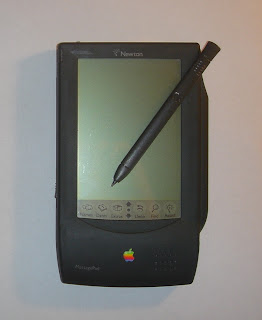 At around the same time, Roger and his guys were making an online newspaper tablet prototype.  Here's a video mockup of what he was doing from 1994:


He, spot on, envisioned tablets as data consumption devices, not data creation devices.  Here's a closeup of the mocked up tablet: 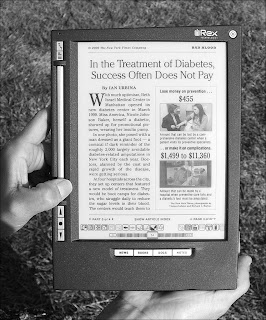 I'm not going to get into did Roger Fidler or Steve Jobs invent the Tablet Computer, but it's worth spending 13 minutes and watching that video up above.

Some things to keep in mind:

There were mocked up 'big Newtons' in Apples own labs (below) so you could make the argument it was only a matter of time. 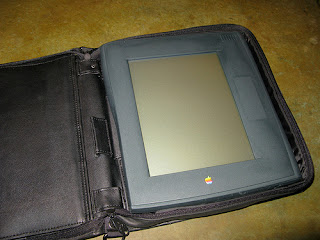 But, everyone likes to be first and get credit where credit is due.  The Knight Ridder folks were first with the interface ideas of how to put a newspaper onto a tablet, that's clear.  The problem was Rogers vision just couldn't happen until a few other things happened.  With the iPhone (and then iPad) those stars lined up and it came together:  Fast low power consumption processors, much better battery technology and highspeed wireless networks.  It was 15ish years after the Knight Ridder video was made before these things got good enough.  Until then, it just wasn't technically possible.

We (AEML) played around with trying to figure out how to build one back then (using, of all things, a Mac Powerbook).... 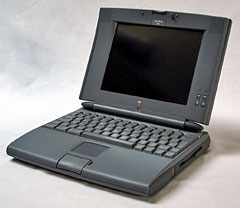 Take off the screen, flip it, put a touch overlay on it, bolt it to the back of the CPU and pretend it's a working tablet (actually, worked pretty well and would have been build-able almost immediately).  But the idea just didn't fly.  Hungry processors, lousy battery life and no wireless bandwidth was still the issue.  It was, quite simply, too soon.  And, it was an ugly hack.  If Jobs had seen it he would have laughed his ass off and fired everyone who'd had anything to do with it on the spot.
But...... we (meaning Knight Ridder, Apple, and all the rest of us) were building on top of other people's ideas all the while.  I could put a LONG list in here as examples, but I suspect you already know this is true.  It's always true with technology.  Hell, just watch a few episodes of a Star Trek series (any will do)

I did enjoy catching up with all those folks though.  It was great to see people that, 20 years ago, did indeed help move the needle a little closer to where we are today.
at August 06, 2012