If you think Facebook knows alot about you, take a look at what your local grocery store is tracking.  If you want (sometimes significant) discounts, you are likely a member of a loyalty program with your local grocery store.  You get a card you scan before you checkout (or just your phone number) and viola! you save $10-20 bucks.  Who wouldn't?

Imagine how that information (what you - mostly - eat) can be interpreted.  Buy a lot of vegetables fruits and chicken?  How about a medical insurance discount to go along with that?  Oh, you like candy, Nutella and pizza?  We'll pass that along to your doctor and your insurance company for a future checkup and premium increase.

If they have a pharmacy (and many stores do) they're able to track that as well.

I'm not saying that's happening today, but, it easily could.  I mean, really.. did you read that Terms of Service for that loyalty program card?

And it's getting even more all encompassing. 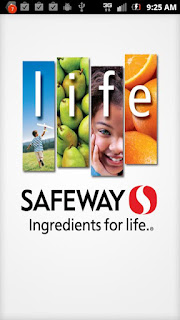 Now, of course, there's an app for that.  Safeway, in this case.

When I walked into the store recently, I was approached by two store employees asking me to 'sign up for our app'.

They were hitting everyone and they had both doors covered to make sure.  This went on for about a week, every day.

So, of course, I signed up.  It's an app!  Yay apps!  I asked them some questions about it but they didn't really know much other than they'd been told to do it.  They had an iPad right there and I was able to set up an account that sent me a link via email to download the app to my phone or tablet.

It's pretty simple really.  You put in your shopping list (which you can use as a check off list while you're shopping) and it finds coupons and deals for things you're looking for.  It also suggests 'additional' purchases (with an associated coupon to prod you toward 'trying it') that might go with what's already on your list.  It also gives you coupons for alternative products (let the competition begin!).

What I find fascinating about this, beyond the privacy and identity tracking issues, is how they are creating an entirely new marketplace via coupons.  It's a little like those endcaps at the end of the aisle- if you sell products at Safeway and you want great placement (end of the aisle) you PAY Safeway to put your products there.  They now have a virtual equivalent that they can sell to companies (pay us X dollars and we'll put up your Jiff coupon for that peanut butter and not your competitors, even though it says Skippy in their shopping list).

They're also creating an incredibly powerful direct relationship with their customer base.

This direct relationship effectively destroys traditional local advertising for third parties.  What grocery store is going to put expensive four color ads in a local newspaper when it has a direct, on their phone, relationship with a majority of their customers, for free.

It also means those coupon aggregation services  (Groupon, Living Social, etc.) are about to be cut out of the equation if the local merchants can get everyone to put an app on their phone that links them directly to that local merchant.

And you think no one's going to put that app on their phone because it's too many apps?  Think again.  How many places do you go on a regular basis?  I'll bet it's one grocery store.  one general purpose store (like Target).  one home improvement store.  Even restaruants... it's likely you favor only a few.

I'll bet it's less than 10 total.  More likely around 5 that you actually go to on a monthly or weekly basis.

What about actually reaching all these people with an app?  I shop at the grocery.  All of us do.  It's part of life as we know it in America.  No avoiding it.  I have a smartphone, everyone I know does and, although it's not the population as a whole, like broadband internet, it'll reach 75%+ in, at most, another decade; most likely sooner.  Phone's are too expensive?  Nope.  Many perfectly useful Android based smart phones are free with a contract.

Imagine some of the big data tricks a store like Safeway could pull off.  Here's one:

That's a smartphone.  Trackable to within 30 feet via GPS and a couple of feet if you add in local wifi hotspots.  I can see store managers pulling up real time heat maps of the store layout showing where people go as they shop.  The path they take.  The displays that are ignored and the displays that draw people in like flies.

You think IKEAs (somewhat blatant) way of  forcing you to walk through the entire store to see what they want you to see via a maze... think about doing that in a way that's far more subtle (and really, manipulative).  But hey.. that's marketing eh?  Talk about real world data manipulation potentials.

So, who owns all that data on you?  It's clearly not yours.  It's a free service.  Remember this and do not forget it:  If the service is free, you are the product.  Someone is selling all your data to someone, somewhere.

And identity as well.  What you do is very closely tied up with who you are.  And who sees that data (health insurance company anyone?) can directly effect your finances, and your life.

But damn, I love all those discounts and coupons I get, so I leave the app on the phone.  Just remember it's there, and know, someone, somewhere, is watching.