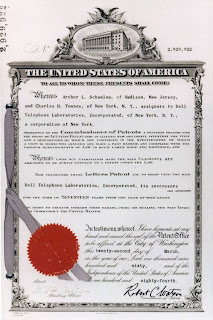 You may not be aware of it, but you can patent a surgery or other medical method. As noted in this article from law.com:

A surge in patents that protect surgeries and other medical methods has triggered numerous lawsuits in recent years, with inventors fighting more vigorously than ever to protect their intellectual property rights.

Patent lawyers say doctors and scientists are suing to protect everything from laser eye surgery techniques to stent procedures to methods for declawing a cat.

This is no small time trend. It's a big deal. From the same article:

"Many physicians are constantly coming up with new techniques and devices. They have started to see some of their colleagues strike it big with patents, so they have tried to do the same," said Dragseth of the Minneapolis office of Fish & Richardson.

Most of these patents are 'method patents'. Similar in many way to a process patent in the business world.

Think about this. If a particular doctor, clinic, hospital or HMO decided that, since it held the patent on a particular stent procedure, they wanted to keep it secret, proprietary and specific to only their business dealings (i.e. their patients). In their view, it would create a competitive advantage.

Now let's say that method had a 2 or 3X better chance of saving a persons life or extending it by years, but you lived where they didn't 'practice' the application of this method (and did not allow it to be used anywhere else or by anyone else they considered competitive).

Compared to the person who has access, you're pretty much screwed.

The same thing applies to business process patents and a to a degree, software patents (isn't copyright law already at work here?). Yes yes, I know.. this isn't life and death stuff, but it, structurally and intellectually, is very similar. It's also a very good way, by comparison, of showing how patents, although good, can also be very bad if used in ways that stifle innovation, human knowledge transference and rapid absorption of ideas into a particular community be it the medical profession or software development.

The patent system is being abused in ways that don't improve the day to day environment we live and work in and it's now actively blocking our ability to move quickly, innovate fast, implement, learn and go to the next level.

And now, it seems, it's potentially keeping people from the medical care they need.

The Patent Reform Act of 2007 is in the works. It moves us from a first to invent to a first to file system (like the rest of the world) and it streamlines the process for challenging patents. I'm not sure first to file is good for startups (it's easier for a big company to file boatloads of patents than it is for a cash strapped startup) but the process for challenges is a good thing.

We're still missing the important part though. A change to what can be patented. Software patents, process patents, method patents, etc. are all (usually) damaging to innovation.

And in the end, a patent is like a really big cannon. Powerful and to be feared by those who would infringe on it. But, with our current system, the shells for the cannon cost millions of dollars (lawyer bills) to enforce and that makes it a friend of big business and not as valuable for startups (other than one's who're looking to bought for their patents).

I know it's a bit of a stretch comparing the impact of medical method patents to software and business process patents. The differences in impact are vast. But the application is very similar. Both make it hard for others to build on the knowledge of those that came before them.

When a system hurts innovation and stifles startups, that's bad. But when the system starts literally killing people, it's most definitely time for a major change.
at July 22, 2007

Surgical method patents are worst example you could have chosen to argue for weakening patent rights. You assume that surgical methods will still be made public without publication of patents. However one of the most valuable trade secrets in history was a surgical method: the use of forceps in pregnancy. The inventor kept the secret in his family for 130 years and restricted its use to lucrative royal births. Compare that to a patent. QED. http://en.wikipedia.org/wiki/Peter_Chamberlen