Illegal to read the Patriot Act 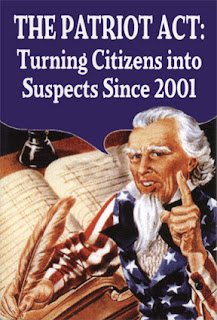 I read this and was BELIEVING IT until 1/2 way in I thought.. hmmm.. looked a the url (The Onion!) and knew it was BS.

WASHINGTON, DC—President Bush spoke out Monday in support of a revised version of the 2001 USA Patriot Act that would make it illegal to read the USA Patriot Act. "Under current federal law, there are unreasonable obstacles to investigating and prosecuting acts of terrorism, including the public's access to information about how the federal police will investigate and prosecute acts of terrorism," Bush said at a press conference Monday. "For the sake of the American people, I call on Congress to pass this important law prohibiting access to itself." Bush also proposed extending the rights of states to impose the death penalty "in the wake of Sept. 11 and stuff."

But I thought it was real for a few seconds! I can't believe I thought that. But... I can, because it's not as bad as some of the things that have really happened the last few years and been reported with similar headlines in the New York Times, Washington Post and my local media.

It was downright surreal. I'm both laughing and, like, ya know... throwing up a little about the whole thing
at July 03, 2007

We happen from chance and have remained a good moment, regards from Catalunya - Spain

The Onion skates so close to plausibility sometimes, doesn't it.
And I'm with you on the laughing and throwing up a bit thing.