Cars: Stepping down while stepping up 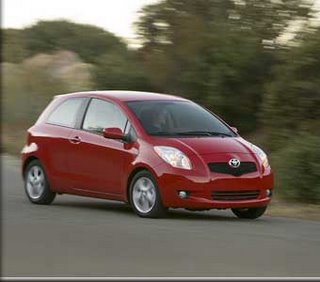 I just traded in my Mini Cooper for a 2007 Yaris. It's weird, As I get older, I'm finding I like simpler, and friendlier to the world I live in.

At 40MPG, this little beastie puts even the Mini Coopers high 20's low 30's to shame.

I've owned Porche's, Lexus and Audi's. I've spent twice the average American's annual income on a single car several times. I've come to the conclusion it's just dumb. That 12 MPG Landcruiser cost as much as 5 of these cars. Did I ever take it off road? Did it save my ass in a pileup? Was there really any reason to buy it other than it was big, it was impressive and it was expensive?

I suppose some of it is just: I don't care what others think of what I'm driving anymore. Yea, I used to. I admit it. I just don't anymore. And, having lived in startup company land the last year or two, I've really grown to love the 'less is more' approach to life and business.

We're just now closing a round of financing from a group of really great people and, damn it, I'm going to do everything (personal and professional) to use that money they trusted me with as if it were my own. So, how do I spend my discretionary income on cars? Do I blow it on an Audi Twin Turbo TT for $50K? Or do I get the Yaris liftback at $12.5K?

Simple. Yaris! And if I do it there, I'll do it in the business too. "Just enough" is really the best approach to life in my book.

If we can each make a small dent by using less resources as individuals, it makes the world a slightly better place for all of us. And if we can achieve the same goals (like: getting from point A to point B in a car) doing that: all the better.

Simplistic stuff, but it's the simple stuff that adds up to overall big change, in our personal life, in our businesses and in the world in general.
at August 13, 2006