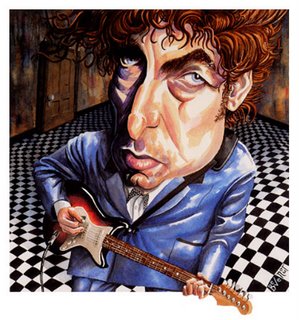 What's interesting about this is he's been on the cutting edge of music for so long, and is obviously using digital technology in the studio.

I wonder if he's releasing the new album on vinyl.

Who'd a thought? From Wired:

Bob Dylan says the quality of modern recordings is "atrocious," and even the songs on his new album sounded much better in the studio than on disc.

"I don't know anybody who's made a record that sounds decent in the past 20 years, really," the 65-year-old rocker said in an interview with Rolling Stone magazine.

Dylan, who released eight studio albums in the past two decades, returns with his first recording in five years, Modern Times, next Tuesday.

Noting the music industry's complaints that illegal downloading means people are getting their music for free, he said, "Well, why not? It ain't worth nothing anyway."

"You listen to these modern records, they're atrocious, they have sound all over them," he added. "There's no definition of nothing, no vocal, no nothing, just like ... static."

Dylan said he does his best to fight technology, but it's a losing battle.

"Even these songs probably sounded 10 times better in the studio when we recorded 'em. CDs are small. There's no stature to it."

Guess it's ok to pirate anything he does that's been digitized eh?