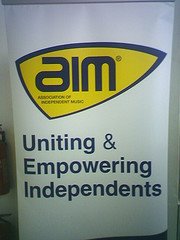 Man, it just keeps getting weirder out there in Music land.

The Brit's RIAA equivalents are now trying to shut down file sharing, in the strangest of ways.

ISPs are now at the center of a fresh controversy in Britain, sparked
initially by major label trade group BPI. The group recently sent letters to
access providers Tiscali and Cable & Wireless, demanding that the accounts
of specified file-traders be revoked. "It is now up to them to put their
house in order and pull the plug on these people," declared BPI chairman
Peter Jamieson. That prompted a sharp response from Tiscali, which scoffed
at the demands. "It is not for Tiscali, as an ISP, nor the BPI, as a trade
association, to effectively act as a regulator or law enforcement agency and
deny individuals the right to defend themselves against the allegations made
against them," the group noted.

Others within the industry are also rumbling against access providers. The
Association of Independent Music (AIM) is just one of several organizations
interested in updating copyright law to hold access providers liable for the
infringing activities of its users. The consortium favors a system in which
the ISP participates in the policing and monetization of content transferred
over the web. The group has been lobbying British officials, asserting that
ISPs unjustly enrich themselves through the delivery of high-speed services,
which often fuel activities like file-sharing. "For too long, the ISPs have
shirked their responsibilities, using music as a tool to sell their own
services, whilst making little effort to ensure fair payment to its
creators," said British Academy of Composers & Songwriters chairman David
Ferguson in a recent BBC interview. From a broader perspective, the
consortium also aims to receive payments from any company deriving value
from the sharing or storage of music, including MP3 device manufacturers,
ISPs and cellular operators.

Let's consider this for a second.

If the ISP's are 'responsible' and 'profiting' from this horrid illegal activity, where's the concept stop? When does it become the responsibility of all hardware manufacturers to 'stop' the horrid illegal activity (in the eyes of the Music Business) of 'playing' songs that don't have the proper DRM and control mechanisms on them? Damn those hardware makers! They are STEALING US BLIND by PLAYING OUR MUSIC (without letting us check every single file on the device to make sure it's been legally obtained). SHUT them DOWN we say!!

How about those irresponsible phone companies? Don't they allow drug dealers to TALK with each other? Could those dealers be selling drugs and making money off of it somehow? My GOD.. SHUT them DOWN. Turn off the phone networks.. NOW!

Of course I'm overstating the point here, but I think it's obvious: those who provide a platform for generic activity (be it an ISP, a phone company, a cable network, a software service) can't be held liable for what the people on it do. Especially if they're even reasonably successful. Trying to 'track' what millions of people do online (or on the phone, or on a service platform) isn't really viable. And even if it was, is it right? Do we enable big brother to step in and watch everything and pass judgment?

My question is: where does it stop? And who gets to 'say what's right'.

What if, for instance, some nutcase got into the White House and decided he or she could just look at or listen into anything, anywhere, that they wanted to, and then pass judgment on what he or she heard based on what they thought was important. Just because he or she could do it by virtue of the 'authority of my position' (true or not).

Man.. can you imagine something like that? I can't...