Yes Virgina.. the Telecoms are screwing you 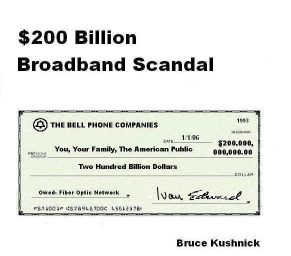 This guy has written a book on just how badly we've been served by the telecom industry in the US.

For a SHORT TIME a download of the book is free (Till June 26th) at this link:

It's big. 400 plus pages. But it makes the very clear case that our telecommunications companies can't be trusted to serve the public in any way other than maximizing profit.

Now, I have NOTHING against profit (or maximizing it). But if you're lying and stealing to do it.. well, not so much. If you take, you should also give. It's a balance (karma?) thing.

The Net Neutrality debate falls squarely into this area as well. Not only have these companies been scewing your for decades, they want still more.

Here's short overview of the book:

To Read this as a PDF file

This book documents the largest fraud case in American history

The case is simple: Do you have a 45 Mbps, bi-directional service to your home, paying around $40? Do you have 500+ channels and can choose any competitive service? You paid an estimated $2000 for this product even though you did not receive it and it may never be available. Do you want your money back and the companies held accountable?

Background: Starting in the early 1990's, the Clinton-Gore Administration had aggressive plans to create the "National Infrastructure Initiative" to rewire ALL of America with fiber optic wiring, replacing the 100 year old copper wire. The Bell companies — SBC, Verizon, BellSouth and Qwest, claimed that they would step up to the plate and rewire homes, schools, libraries, government agencies, businesses and hospitals, etc. if they received financial incentives.

The Harms and Outcome

The Truth: This is a Fraud Case

20 Year Analysis of Revenues, Profits, Expenditures: This book is based on a 20 year analysis of Bell-supplied data, Census Data and Business Week. Since 1984::

Teletruth has filed a complaint with the Federal Trade Commission, (FTC) to investigate the claims presented; the book is the data for our complaint.