Raising Money for an internet startup... 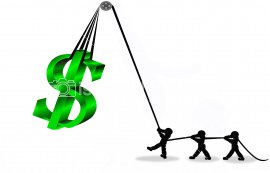 This should be interesting. Our company, ClickCaster, has taken a slightly different route when it comes to how we fund outselves.

We looked at going the venture capital route late last year and talked to a couple of dozen VC's. We even had some indepth talks with 3 or 4. The conclusion we came to was, it just didn't make sense to take VC money.

Much has been written about this by various bloggers, but experiencing it first hand was particularly interseting. We looked at what it would take to build a Web 2.0 type company, in our case, a podcasting business focused on directory services and creation tools with a social networking wrapper and we decided that we'd have a hard time spending $5M (or $3M) of VC money. At least, if we were being responsible.

It just doesn't take that much money to do this anymore.

And once you take that money, you start to trap yourself into high valuations to get the kind of returns those VC's are looking for. That, in turn, limits our options down the road (if you have to sell for $200-300M vs. $30M to provide a decent return, well, you get the idea).

So it turns out that, as an early stage technology company, VC money was available, and tempting (very tempting) but.. was it smart?

So we decided to lay back and build the service out more. We opened a public beta in late 2005 and just kept building it. We'd take user feedback, and add it. We'd take our users bug reports (everyday average users are WAY better at finding bugs than a formal test team) and fix them. And, interestingly, the customers started coming to us.

So we're in the process now of building a pipeline of business that uses ClickCaster, our service, as a platform that many other businesses can use. Small independent folks looking to promote a service, or a type of music, or an idea. Professionals with valuable information people are willing to pay for (which drove our creation of a commerce engine for people to charge for a single podcast, or a subscription to a series of podcasts over time).

And now we find ourselves with several contracts either signed, or about to be signed, and some pretty interesting businesses ahead of us.

And NOW, we need some money.

But not alot of money. Just enough is really all we want. The amount we think we can do it with is less than $1M. Now, for us at this stage, that's real money, but to a VC, it's not really worth their time.

So, we decided Angel Investment was the way to go.

I've been talking to a local VC here in Boulder named Brad Feld for over a year now. Great guy, very smart, get's the space, fair, open and tough. Exactly the kind of guy you want involved in an Angel round.

He offered a couple of months ago to lead an angel investment round if it looked like we really had a business and told me to come to him if I was convinced this was something we could really make fly.

So we continued development and we watched our usage numbers grow. From a few thousand users in Jan to almost 100,000 in May with over a million page views. OK.. we've got something here.

And that's where we are now. About to start a round of Angel financing. This is a first for me. Raising the money directy, in chunks, from wealthy individual investors.

I'm going to keep a sort of running story on the progress of it here. I'll change names to protect the innocent, and, hopefully, learn something about the process.
at June 26, 2006

What's interesting to me is that I'm not sure it ever really took "that much money" to do an internet startup. Sure, servers and bandwidth were more expensive back in the day, but hard work and smart entrepreneurial people cost about the same in todays dollars, don't they?

Yes, there are some very real reasons why one can get an internet startup going today for way less money. But I think a big part of it is that there's way less money available because the venture capitalists (including the angels) simply know better now.

But in 1999 it sure was fun to visit even the most brain-dead businesses on the planet and play a little pinball or laser tag. We all miss that (well, unless you work at Google).

Good luck with the funding round. Sure sounds like u got your st*** together and done your research.

Agree with David that most Angels/Vc are a lot more savvy now where as in the dotcom arena it was 'easy'!

Be interested 2c (or hear) how this progresses and especially the 'behind-the-scenes' antics.