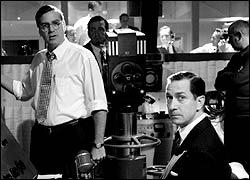 Scene from the movie, "Good Night and Good Luck"

This is a movie you will love or hate. If you liked the recent video game movie "Doom", this isn't likely to turn your crank. Or, if you voted for George Bush, twice, and still think he's an oustanding president who makes no mistakes and always does the right thing, well, not so much.

But, if you think, and you do it not as a liberal or as a conservative, but as someone who asks 'what's the right thing', this one's for you. A little slow at times, even a little somber, and if you're offended by cigarettes, man, look out (did EVERYone smoke 24/7 back then?) but what a message.

Have you ever stopped yourself from writing an email or sending a note to a newspaper editor (or post a comment on a blog) because you didn't want to get 'marked' as a malcontent? A troublemaker? Someone the government might 'look at' based on your views? Ever do it, but use a fake name and email address? Come on... be honest. That's what it was like back in the early 50's during the 'red scare'. Ask yourself if that's how it feels now as well. Maybe not as much as a couple of years ago, true, but still, it's there.

Ever journalist in America should be required to see this movie. And every blogger and poster on the internet should give it a screening.

I've heard all the 'Mccarthy was right" and 'haven't you heard of the Veronica Project" (a code breaking effort that showed that, indeed, there were actually Russian spies where Mccarthy said there were). I even believe Mccarthy honestly believed what he was doing was right.

But the WAY he went about it was toxic. Using fear and intimidation with the threat of being hauled away or charged and found guilty without a fair hearing on something you've been accused of, that's not the way to celebrate a free and open society. Taking away rights we've fought for, as a nation, for two centuries, that's something to be examined very very closely.

In the end Mccarthy was censored and put 'in the back row' of the Senate. Edward R.Murrow, the leading newsman of his time, had his show taken away and was 'relegated' to Sunday afternoons by CBS. Both battled it out and, in the end, both paid a price.

Sadly, both believed. One believed in freedom, the right to face your accustoms and the belief in innocence until proven guilty. The other believe 'he was right and would prove it by any means necessary.. no backing down, never give up'.

Sound familiar? I think so. And I think a lesson can be learned here, if we only listen. History really does repeat, and, hopefully, it'll repeat all the way to the end this time as well.