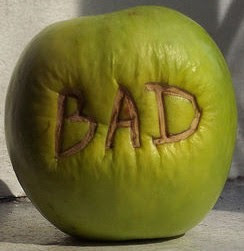 Heh.. I just knew this would happen with the iPhone.

The reality is Apple's history and inclination means it just can't help itself. Here's a short blurb from today's New York Times :

It was not unexpected that Apple would try to stop people from unlocking the phones, as this threatened to cause problems for AT&T, Apple’s exclusive United States partner for the iPhone.

“I don’t blame them for fighting the unlocks,” said Brian Lam, editor of Gizmodo, a blog devoted to gadgets. “They are trying to make money, as a business. I get that.”

Still, he said, that disabling someone’s phone, “instead of just relocking it and to wipe out the apps, it seems like Apple is going way too far; I’d call it uncharacteristically evil.”

As some of you know, I worked for Apple in Cupertino from the mid 80's to the mid 90's and got a very up close and personal view of the company, how it worked and how it tended to think. I was one of the converted when I joined them and, by the time I left, I had very mixed feelings about the company.

On one hand, this is a company that makes truly wonderful products. It's basic DNA is all about making technology useful for the average person. And it knows how to infuse beauty and elegance into products like no one else on the planet.

But the dark side of this equation is it's control freakness. This is largely a result of Steve Job's personality, but I was at Apple during the time that Jobs was not part of the company and that control freak nature was alive and well without any one person egging it on.

I could name dozens of examples but one that sticks out is when Gasse' (then president of the R&D organization) found a group secretly porting the MaxOS to the Intel platform. This was the second half of the 80's. And, they'd done it. Gasse' (I'm told) saw it for the first time and immediately fired them all and shut it down. Same thing happened again a few years later when John Sculley was CEO and David Nagel was in Gasse's shoes. I was told Sculley sanctioned it, it got to the point of being real and Nagel convinced Sculley to shut it down (they didn't fire everyone this time though).

Why be so weird about not having Apple hardware running Apple software?

What do you think a Macintosh is? It's hardware copy protection, Apple's own take on DRM, if you will, for what Apple considers is crown jewel: The MacOS.

This is one of the main business reasons you can't buy a the MacOS without a a Mac. Oh, sure, it also has to do with controlling that experience (there's that control word again) but in the end, it comes down to the dollars involved.

Going from a (when I was there) an $11B hardware/software company to a $2B software (only) company was something that couldn't even be contemplated. Still can't.

Same thing is happening here with the iPhone. That hardware (and it's locked down services) are a form of copy protection for the real value: The software that makes the phone so easy to use. And that revenue number for hardware AND software just looks a hell of lot better on the balance sheets. It certainly makes the stock price easier to justify.

So....Control Freakness for sure, but also a way of doing business that Apple hasn't really moved off of since the Macintosh was first shipped in 1984.

What complicates things are how the MacOS is now built on top of BSD. Many many Open Source, what's fair, what should you share kind of questions here.

Apple's built a great set of products on top of the work of others now. It's not all Apple's sweat anymore.

You'd think, with that in mind, they'd be a little more open. I can see locking down the cellphone service. There's a lot of investment and business contracts circling that particular relationship.

But locking out all third party applications? That's not only a little bit evil, it's just plain dumb.

And I will bet you an unlocked working iPhone that it's all Steve Jobs doing.

King of the control freaks; back in the saddle again.
at September 29, 2007