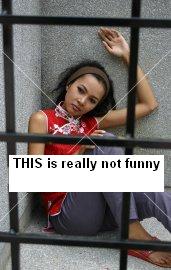 OK.. this is nuts. Girl in Philly get's arrested and detained for THREE WEEKS because she had 2 condoms, filled with flour (used as a squeeze like stress reliever by she and her dorm buddies during tests) in her suitcase.

Three friggin weeks?? And this was in 2003. She's now suing the City of Brotherly Love for half a mil (WAY low if you ask me).

I love my security and safety.. Really I do. But I love my freedom more, and this is getting truly stupid.

Bush running hundreds (maybe thousands?) of wiretaps that most leading legal scholars say is illegal (regardless of his 'my authority is the US constitution' argument).

The NSA dropping browser cookies into anyone's computer that visits there website that tracks where you go and what you do on the internet (without asking, and with a 20 year expiration date).

A quickly written law (The Patriot Act) that, although done with all the best intentions, opens doors that really, truly, should not be opened.

Monitoring and tracking peace demonstrators (something I don't personally take part in... but what if I was walking by when they were taking pictures? Guess I'm one of em.. guess I'm going to be monitored, tracked and followed now)

Detaining people, without even charging them, for years. CHARGE them with something, for god's sake. If they're such a threat, you've got to have something on them to charge them with.

This shadowy stuff is more than a little scary.

This hit me because this is very real world, with a very innocent person being detained for carrying flour that 'might' be drugs (or something..)

I see a link between this kind of behavior from our police and other governement authorities and their increasing over reaction to anything seen as a threat. It's carrying over into average people's lives in a very negative way. See my earlier post:

on the women who refused to show her 'ID' while riding on a public bus and was arrested.

Why did this happen? Maybe because...She's asian. It was WHITE POWDER. It might be drugs...maybe something else?? Ask: If this was sept. 10th, 2001, think it would have happened? Three weeks in jail? I doubt it. Overnight detention maybe. Maybe.

They should call in the CSI guys on TV. They can do highly complex DNA tests in, like, what, 15 minutes?

Seriously though, a test like this should be simple and fast. "Opps.. you're right.. flour.. sorry bout that"...

Old Ben Franklin nailed it when he said:

"They who would give up an essential liberty for temporary security, deserve neither liberty or security"

The balance is out of whack. WAY out of whack. To our leaders: Get it together. Find some reasonable balance. Be smart about security, but don't crush, or even dent, the freedoms this country was founded on.
at December 30, 2005