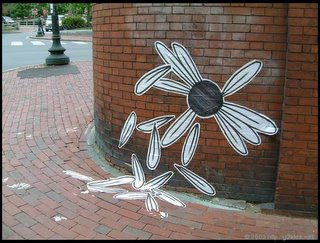 Graffiti. I’ve been thinking about that last post on Wikipedia and the uproar over how anonymous posting there can be troublesome and, in some cases, potentially libelous. It brings me to some personal experiences, both recent and in the past that tells me: anonymous isn’t necessary goodness.

I’m CEO of a podcasting startup called ClickCaster (www.clickcaster.com). We had some debate among the development team on whether to allow anonymous podcasting or not and, after going back and forth, decided that there needed to be some degree of accountability for what you say in your podcast. At the very least, you needed to supply a verifiable email that someone would complain (or send praise) to. You can still browse and listen to podcasts, but if you want to post something, you’ve got to supply a working email.

And this reminded me of a program developed internally at Apple computer back in the late 80’s, early 90’s by a fellow (Harry C) that had a somewhat profound effect on the company. It was called Graffiti, and that was exactly what it was. It was a small program you installed on your Macintosh, and it had two fields, one for text that you’d enter, and one for text that others entered to appear in. Super simple. Super fun and it, for a while, brought the Apple Campus network to it’s knee’s (thousands of copies running on virtually every employee computer in Cupertino).

Harry wrote it while working for ATG (Advanced Technology Group) and then, worked for me in the AOS (Apple Online Systems group). The sheet hit the fan, unfortunately, when he went to work for me, so I got a front row seat (as his manager) to what unfolded.Since you didn’t have to name yourself when you put text in and blasted it all over the network, making it anonymous and very graffiti like (hence it’s name), you also could say anything you wanted. Some people did, and it was fun.
But some people posted rumors, and gossip. One in particular was started about an HR exec who was sleeping with his administrative assistant. No biggie, most people at Apple back then were single and it’s was pretty common, This guy was married though, and in a sensitive job that interacted with a lot of people. And, unfortunately, it might have been true. This exec found out, went to the engineering VP (I think it was Larry Tesler… can’t remember) who, eventually, got to me, the software authors manager.
Because the software assumed a small (Apple only) audience, and it was a closed system, Harry thought it wouldn’t be a problem that it was anonymous. He was wrong. He was forced to pull the software from the network (although, if you had it, you could keep running it) and he was almost fired over it (I intervened, of course). But the lesson was learned.

Anonymous posting is almost always bad. There are a few (rare) cases where it makes sense (political, personal or professional repercussions if you associate your name with something for instance) but, in general, it’s better to have accountability than not to.

Hopefully, the Wikipedia folks have learn this lesson as well.
at December 05, 2005

Scott, I don't think it was me. I have no memory of that situation.

Direct from the source: It wasn't Larry (as noted in the log, I wasn't sure..). Let's reword that to say: "someone at a high level in engineering at Apple at the time".

Larry, sorry for the misunderstanding.