What is (and isn't) fake news and why is it important we train ourselves to know the difference?

Fake News is everywhere, and no where.  It's undermining our 4th estate and it's being used by unsavory forces in truly scary ways. 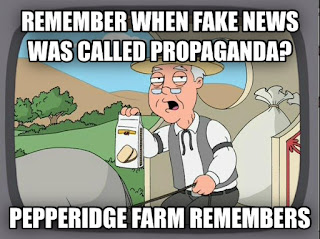 There was a fascinating and brillant exchange on Reddit (www.reddit.com) about 'fake news' that every citizen who wants to stay informed should read.  Here is the initial post (from reddit user 'DongMy') and then the reply (from reddit user 'Deggit').

Actually a lot of fake news is being generated by the government itself now.  Obama repealed the law to prevent government propaganda and in 2011 removed the last remnants of the Fairness Doctrine which required broadcasters  to both present controversial issues of public importance and to do so in a manner that was honest, equitable, and balanced in order to help push his agendas.  When you consider 90% of the media is owned by 6 companies which includes all TV, radio, news and movies, most of which have a bias and agenda, this is a big problem.  It's no wonder the political division and fake news has gotten so much worse since he was elected.  Image of his post:

To anyone coming from bestof, here is the comment I was replying to. I have responded to many comments at the bottom of this post, hopefully in an even handed way although I admit I have opinions yall...

The view presented by this 1 month old account is exactly how propaganda works, and if you upvote it you are falling for it.

Read "Nothing Is True And Everything Is Possible" which is a horrifying account of how the post-Soviet Russian state media works under Putin. Or read Inside Putin's Information War.

The tl;dr of both sources is that modern propaganda works by getting you to believe nothing. It's like lowering the defenses of your immune system. If they can get you to believe that all the news is propaganda, then all of a sudden propaganda from foreign-controlled state media or sourceless loony toon rants from domestic kooks, are all on an equal playing field with real investigative journalism. If everything is fake, your news consumption is just a dietary choice. And it's different messages for different audiences - carefully tailored. To one audience they say all news is fake, to those who are on their way to conversion they say "Trust only these sources." To those who might be open to skepticism, they just say "Hey isn't it troubling that the media is a business?"

Hannah Arendt, who studied all the different fascist movements (not just the Nazis) noted that:

In an ever-changing, incomprehensible world the masses had reached the point where they would, at the same time, believe everything and nothing, think that everything was possible and nothing was true. The totalitarian mass leaders based their propaganda on the correct psychological assumption that, under such conditions, one could make people believe the most fantastic statements one day, and trust that if the next day they were given irrefutable proof of their falsehood, they would take refuge in cynicism; instead of deserting the leaders who had lied to them, they would protest that they had known all along that the statement was a lie and would admire the leaders for their superior tactical cleverness.


Does that remind you of any subreddits?

The philosopher Sartre said this about the futility of arguing with a certain group in his time. See if any of this sounds familiar to you


____ have chosen hate because hate is a faith to them; at the outset they have chosen to devaluate words and reasons. How entirely at ease they feel as a result. How futile and frivolous discussions appear to them. If out of courtesy they consent for a moment to defend their point of view, they lend themselves but do not give themselves. They try simply to project their intuitive certainty onto the plane of discourse.
Never believe that ______ are completely unaware of the absurdity of their replies. They know that their remarks are frivolous, open to challenge. But they are amusing themselves, for it is their adversary who is obliged to use words responsibly, since he believes in words. The ____ have the right to play. They even like to play with discourse for, by giving ridiculous reasons, they discredit the seriousness of their interlocutors.
They delight in acting in bad faith, since they seek not to persuade by sound argument but to intimidate and disconcert. If you press them too closely, they will abruptly fall silent, loftily indicating by some phrase that the time for argument is past. If then, as we have been able to observe, the ____ is impervious to reason and to experience, it is not because his conviction is strong. Rather his conviction is strong because he has chosen first of all to be impervious.


He was talking about arguing with anti-Semites and Vichyists in the 1940s.
This style of arguing is familiar to anyone who has seen what has happened to Reddit over the past 2 years as we got brigaded by Stormfront and 4chan.

Ever see someone post something that is quite completely false, with a second person posting a long reply with sources, only to have the original poster respond "top kek, libcuck tears"? One side is talking about facts but the other is playing a game.

Just look at what happened to "Fake News."

This is a word that was born about 9 weeks ago (note: actual date he's talking about is around the first or second week of November, 2016). It lived for about 2 weeks as a genuine English word, meaning headlines fabricated to get clicks on Facebook, engineered by SEO wizards who weren't even American, just taking advantage of the election news wave:


For a while, it seemed like the real world could agree that a word existed and had meaning, that it referred to a thing. Then the word was promptly murdered. Now, as we can clearly see, anyone who disagrees with a piece of news - even if it is NEWS, not an editorial - feels free to call it "Fake News." Trump calls CNN fake news.

There is a two step process to this degeneration. First, one gets an audience to believe that all news is agenda-driven and editorial (this was already achieved long ago). Second, now one says that all news that is embarrassing to your side must be editorial and fabricated.

So who is the culprit? Who murdered the definition of fake news? A group of people who don't care what words mean. The concept that some news is fake and some news is not was intolerable, as was any distinction between those who act in good faith and sometimes screw up, vs those who act in bad faith and never intended to do any good - a distinction between the traditional practice of off-the-record sourcing and the novel practice of saying every lie you can think of in the hope one sticks. The group of people I'm talking about cannot tolerate these distinctions. Their worldview is unitary. They make all words mean "bad" and they make all words mean "the enemy.". In the end they will only need one word.

This post is so biased. I was ready to accept its conclusions but you didn't have anything bad to say about the Left or SJWs so it's clearly just your opinion.

No, the term goes back to a NYT investigative report about some people in SE Eur who "harvest" online enthusiasm by inventing viral headlines about a popular subject, & who realized that Trump supporters had high engagement. This is no different than what the National Enquirer does (TOM CRUISE EATING HIMSELF TO DEATH!) except the circulation was many times more than any tabloid due to the Facebook algorithm and the credulity of their audience.

But what about the MSM? Haven't the media destroyed their own credibility with OBVIOUS LIES?? What about FOX News? What about liberals who call it FAUX News?

I remember Judy Miller as well as anyone, people. I also remember Typewritergate and Jayson Blair. And sure one can always go back to the Dean Scream or, as Noam Chomsky points out, the fact that Lockheed Martin strangely advertises on news shows despite few viewers can afford to buy a fighter jet... there have always been valid critiques of the media. But I am talking here about something different.

The move of taking a news scandal and using it to throw all news into disrepute is what this post is about.

Briefly in my OP (note:Original Post) I talked about the first step of propagandization, which is inducing a population to see ALL news as inherently editorial and agenda driven. This was driven by the 24 hours news cycle and highly partisan cable tv. We have arrived in a world where a majority of people think the invented term "MSM" (always applied to one's enemies) has any definitive meaning, when it doesn't. The most-watched cable news editorialist on American television calls a lesser-watched editorialist on a rival network "the MSM," when neither man is even a newsreader. It's absurd.

The idea that the news is duty bound to report the remarkable, abnormal, or consequential, has been replaced by the idea that all news is narrative-building to prop up or tear down its subject. We already saw this early in the primary when the media was called dishonest and frenzied just for quoting Trump. A quote can no longer be apolitical! If it's damaging, the media must have been trying to damage.

Once this happens, it is a natural next step to adopt the bad-faith denial of anything that could be used against you. This is what Sartre talks about; the "top kek" thought-terminator makes you "deliberately impervious" to being corrected. Trump denied he ever said climate change was a hoax even though he has repeatedly tweeted this claim over years; journalists collated those tweets; and the top-kekers responded by saying the act of gathering those tweets is "hostile journalism."

Pluralism cannot survive unless each citizen preserves the willingness to be corrected, to admit inconvenient facts and sometimes to admit one has lost. In that sense alone, the alt-right is anti-democracy.

Isn't the Left crying and unwilling to admit they lost the election? That's anti-democratic too.

I invite you to consider the response of T_D in the hypothetical that Trump won the popvote by 3 million, lost the Electoral College and it was revealed that HRC was in communication / cooperation with one of this nation's adversaries while promising to reverse our foreign policy regarding them.

"Sartre was a dick."

You can see the entire thread on reddit here:

Special thanks to ggirl for pointing this out on her google + feed.
at February 14, 2017