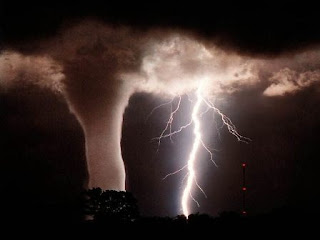 Every so often, it's important that you get out from behind your keyboard and drop off your usual grid.

I like walk-Abouts. Actually, it's more the American version re: Drive-Abouts. It's something I've done periodically for years and it takes the place of a planned vacation very nicely for me. Solitary, mind clearing and life re-affirming. You get in your vehicle, with no clue where you're going to end up, and you drive. I've ended up in NYC, biker bars in CA., deep in Mississippi's swamps and in the middle of Death Valley.

I also like storm chasing. Tracking down heavy weather and tornadoes is invigorating in ways I suspect is similar to how big game photographers must feel when stalking rhino's or lion prides. So, this week I'm dropping off the grid and mixing the two up by heading to somewhere in center of the country with my trusty little AWD, some video and still camera's, a GPS, CB/weather radio, a laptop with Swift WX and GRLevelX software(weather tracking/radar software) and a hankering for roadside diner food with no $5 a cup coffee shops within a 100 miles. 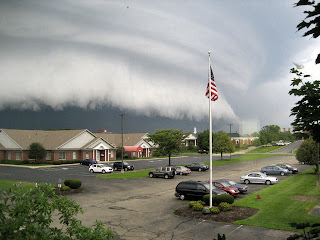 I'll also be bringing along a high level of healthy respect for wall clouds (above). I've done this for years now and, generally, it's a hit and miss endeavor. I'd say 1 out of 4 times to I actually get close enough to see a tornado, but man, it's like nothing you've ever experienced until you've done it (and I've climbed mountains, raced cars and skydived in my younger days). Oddly, it's the opposite of doing high adrenaline sports in that you, really, have no control over the environment.

It's both terrifying and calming.

I wouldn't recommend it for everyone, but one things for certain, after chasing a tornado across the long flat plains of Kansas and actually catching up and having one stare you down, it puts all the other concerns, fears and hopes in a persons tiny little world in crystal clear perspective.
at June 14, 2008

Going out for a chase is not really a game just to have fun cause it means that your risking your life..respecting mother nature and prioritizing safety should always be on concern..But definitely once you go out for a chase it's like an unforgettable experience you'll ever had plus the adrenaline rush for excitement...:)

Not sure how I missed this one.
sounds like a blast. Wish we'd done it once together while I was out there with you! wish I could get away with doing it sometime in the future....