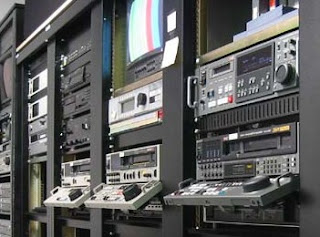 Our CEO, Tom Keller, and I go back and forth on UGC vs. more professionally produced pro and semi pro content. I tend to lean toward UGC, he leans toward the pro stuff.

The more I use online video, the more I'm thinking Tom's right.

You could even say I'm doing a full circle in becoming a believer. Peter Gabriel just lead a $5M round for a music site called 'The Filter". His view is that there is so much stuff out there that people need editorial context to guide them.

This is something that swings back and forth. Back in the late 80s, I was saying the same thing when we did eWorld at Apple. I recruited Knight Ridder and The Washington Post newspapers (among many others) to create cache and draw people to our service. I spent a day at the post watching the paper 'being made' and decided it was a daily miracle that it actually got out each day (sooo much labor).

One thing the managing editor said to me sticks with me even now: "Scott, people don't pay us for what we print, they pay us for what we don't print...it's all about filtering out the noise and presenting, with a discerning eye, things that matter to our readers".

There's a balancing act in here somewhere that's the sweet spot of online video content. There's some really great UGC out there. And there's obviously some great pro and semi pro content. The real added value here is figuring out how to filter the UGC and procure the pro and semi pro content in a way that doesn't require a thousand people like the old media systems of The Washington Post, or in our case the old video stalwarts like TV networks and movie studios.

Do that, and find ways to make the process as automated and painless as possible, and you've hit a home run.

Scott, thanks for your post. I tend to agree that editorial is needed, but it is crucial in my opinion to keep the non filtered sites open too. Re content discovery through technology - the more I see companies in this field, the less I believe it could work.