What happened to Google's 'don't be evil' 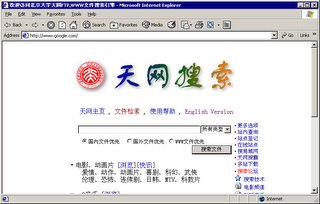 With the announcement of Google opening a search engine in China, and agreeing the the Chinese government's limits, you have to wonder: Is Google becoming evil?

Or, just maybe, it's a trojan horse.

Here's my Doing Business With China story and how I think it might relate to what Google's doing right now with it's internet business in the Middle Kingdom.

I used to work for Motorola back in the mid to late 90's where I ran new business creation for a recently created multimedia group. This group lived inside of a business unit that was responsible for creating services business within 'greenfield' (not yet penetrated by the company) markets. Places like Asia and S. America. Mostly for Motorola products like cellphones and pagers.

So, after I'd been there for two weeks, they asked me: What can we do with some of our new products and with our friends at Kodak?

So I made up a product and business that combined Kodak digital camera's (just coming into their own) and the Irridium sat phone technology that Mot was just getting up and running (a sat based phone that would work anywhere on the surface of the planet).

The idea was: Create a kiosk with a camera in it that would link the mass of young adults who were moving from China's countryside to the cities back with their parents. The kids (about 100 million of them) would send emails and pictures back to their rural parents through these kiosks placed a post offices around china. The kiosks would have Kodak cameras in them, and it would be linked by the Irridium network (since there was no infrastructure in China's rural areas).

I thought is a kind of interesting. But only kind of. It was one of several ideas but it had a Camera in it, and our boss was friends with the CEO of Kodak. So..we pitched it to the CEO of Kodak at the time and he loved it (go figure). A 30 min meeting with him went on for 3 hours.

So we went to build a prototype. I spent alot of time in China and in New York (Kodak) getting things worked out.

My secret goal: Sneak the internet into China. Create informational freedom. Open up the country to new ideas and the internet way.

It's SO nice to be ignorant of reality at times. But only in the beginning.
at January 26, 2006