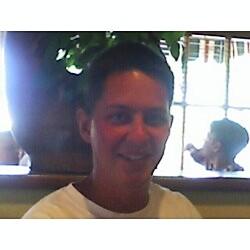 Shaun at Chili's. He wouldn't eat, but he'll drink a beer. We were meeting with one of the guys that's interested in being a developer for ClickCaster (known as RadioActive Milo by some of us, and as Tony by the world at large). Shaun's our security guy, IT and admin as well as taking a leading role in the development of the ClickCaster podcasting client and tools. Good stuff.
at July 10, 2005