Aggregator, Curator, Editor.. it's all the same thing

The NYT wrote an article on Oprah's new network OWN (Oprha Winfrey Network.. surprise) talking about how it's a 'curator' of content.

This got me to thinking about a conversation I had with the managing editor of the Washington Post newspaper back in the early 90's. He said:

"People read our newspaper because of what we don't print".

The Washington Post was providing editorial perspective to content. They filtered. They provided context. They aggregated a mass of content, filtered out the chaf, collected it together (curated) and presented the package to a willing to pay for it audience. 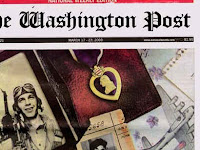 That's 1/2 of where the media world is heading.

The other 1/2 is actually kind of new. It's powered more by technology than media and it's that oh so often used word: social . This is also called 'social networking' and used to be called 'community'. It's also been around forever. The draw of your friends providing guidance to what media you consume by recommending TV shows, movies, books and magazines, or driving you through social obligation to play games like World of Warcraft, or Farmville, that's just community turbocharged by technology.

So, it really just comes down to two things driving all this media (and really, consumption in general) stuff:

I know this seems overly simplistic, but we tend to complicate things far more than needed in todays tech world. My take is to focus primarily on those two things, take the time too figure out what area of all the complexity that underlies them to make them better you should scope in on, and you'll likely come up with something very successful.

Will Oprah's OWN network succeed? Well, does it have an editorial perspective and does it draw on community?