Is Apple a Republican? 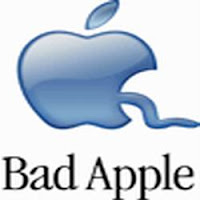 I don't mean this in the political sense, I mean it in the 'how we do business' sense.

I've noticed that Apple simply never, ever, says it's sorry. It also never admits it's wrong without being called on it, repeatedly, by many sources, over days or weeks (sometimes months). The latest example being the 3G phones unreliability and the MobileMe online service outages and outright failures.

Apple is also the most secretive company in the business. everything is a secret, even inside the company with product teams working on the same product. It's compartmentalized and everyone is isolated from everyone else (outside of their immediate group). Sound a bit like our current administration? Just a little?

I've also noticed that all the latest "I'm a Mac, I'm a PC" ads, although cute, funny and fluffy, are negative ads. Negative in the sense of attack ads, similar to what the Republican's do so very well.

I know.. it's a stretch, but comparing the Rovian Republican attack ads to Apple ad's that have the PC guy doing most of the talking, usually pointing out what's wrong with the PC or the OS, vs. having the Apple guy talk about what's good about itself seems like a reasonably fair comparison.

The only difference is Apple does it with a sense of wry humor .. all soft and fluffy... vs the lead pipe/scare the hell out of you Republican approach. Same result though: You're left with the kind of residual feeling that the other guy's a loser and not to be trusted (or purchased over an Apple product).

Have you seen a positive Republican advertisement lately?

Watch the Apple Ads. Have you seen a positive Apple ad for the Mac (that's not denigrating the PC somehow) lately?

I'm bi-computational. I own two Mac's and an iPhone. I also own several PC's. I use them all for different things. Apple makes an overall great product. I'm not really attacking the products there, I'm criticizing the company itself, and it's way of doing business, more than anything.

I could also expand this a bit more into the 'elite' (meaning: Rich/Republican) vs. 'everyday joe' (meaning: Average/Everyman/Democrat) argument and make a pretty convincing case for how PC's, which are cheap, ubiquitous, easy to repair (or just replace) are the every day joe computer where the Mac is (perceived as) expensive, difficult to upgrade/repair and generally embraced by more of the rich elite, but, being the Libertarian Hippie that I am, i won't go any farther with that line of thought.

So, add it up: Denying problems that are obvious to everyone, ignoring problems and not addressing them unless the press exposes them over and over and then doing something minor to create the idea that you're trying to alleviate the pain, but still not admitting fault; obsessive secrecy about everything they do both inside the organization and in what's presented outside and, finally, attacking your opponents relentlessly via attack ads sounds a lot to me like business as usual for the Republicans.

And now, if you just stop a minute and think about, Apple Inc as well.

Steve Jobs may be a far left Buddhist/democrat, but his company looks very Republican to me.

UPDATE: How to upgrade a Mac (click for original): 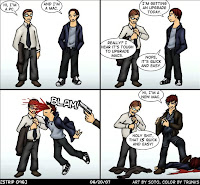