How "Free" Permeates Everything, Even Art

Chris Anderson of "The Long Tail" fame has a new (old?) Meme: Free.

You can read it here. If you haven't already, you really should.

And if you don't buy the Free Meme (pun intended), look around. Music, Opensource software, even the world of street art you can see how giving away your art can create real financial gains. 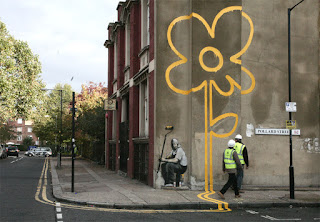 Banksy, a UK based graffiti artist, has been creating clever street art for years. Effectively, giving away his art on the walls of buildings (among other things) all over the world. He's garnered so much adulation in the art world that his 'free' art is now worth 6 figures.

On 7 February 2007, Sotheby's auction house in London auctioned three Banksy works, reaching the highest ever price for a Banksy work at auction: over £102,000 for his Bombing Middle England. Two of his other graffiti works, Balloon Girl and Bomb Hugger, sold for £37,200 and £31,200 respectively, which were well above their estimated prices.[15] The following day's auction saw a further three Banksy works reach soaring prices. Ballerina With Action Man Parts reached £96,000; Glory sold for £72,000; Untitled (2004) sold for £33,600 - all prices being significantly above estimated values.[16] To coincide with the second day of auctions, Banksy updated his website with a new image of an auction house scene showing people bidding on a picture that said, "I Can't Believe You Morons Actually Buy This Shit."[17]

It get's better. Less than a year ago, this work (below) sold for over half a million dollars.

If you create value, even when you're not trying to and you give it away for free, society will find a way to create value around it. Even if, in Banksy's opinion, your a moron for doing so. 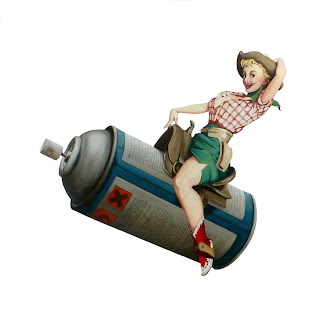 I've been mulling over this issue related to our own product pricing.

"The biggest gap in any venture is that between a service that is free and one that costs a penny. I can't think of a single premium service that has achieved truly viral distribution. Can you?"

"Free is only a tactic, though, not a business model."

She referred to an old Fred Wilson post in 2005 called "In Defense of Free".

Here at ProofHQ we spent time thinking about whether and how to offer free accounts.

"Whether" took about 10 seconds to decide. In this day and age who doesn't offer a free trial, a taster, a trial-to-buy. It's sales 101. From the time that people first started to gather to trade sellers have been offering free stuff to entice new customers - its a fundamental part of human nature to want to try something before making a commitment. It reduces the risks for both the buyer and the seller.

With the old-world of enterprise software sales the trial was a hard option. Deployment was slow, complex and risky, making quick trials difficult to deliver. Case studies and reference customers replaced trials. As a result a greater proportion of the deployment risk landed with the customer. In the last two years all that has changed. Just recently one of my clients (a multi-national) wanted to add a module to a proofing and approvals workflow that I designed with them. It wasn't a case of WHETHER they could have a 30 day trial, but WHEN. They just expected to try before buying. That cultural shift has been swift and pervasive and it is a brave software vendor that doesn't offer a free trial of some type.

The biggest question for us has not been whether we offer a free version of ProofHQ, but HOW.

ProofHQ was created with business users in mind. That means providing businesses with services that offer real value and for which they will be willing to pay. ProofHQ is not a consumer internet service that can live off advertising and/or with the hope of a quick flip to a Google or Yahoo (Note: Don't let that put you off picking up the phone though!!). So from the outset we have planned to charge for the service. However, we have also planned from the outset to offer at least a free trial and possibly a more extended free licence if possible. The reasoning behind this was two-fold. Firstly, as already mentioned, customers just expect to try before buying. Secondly, there are network effects in collaborative business applications such as ProofHQ. Just the process of starting a review with ProofHQ automatically introduces more users into the system. Offering those users a free trial makes obvious sense.