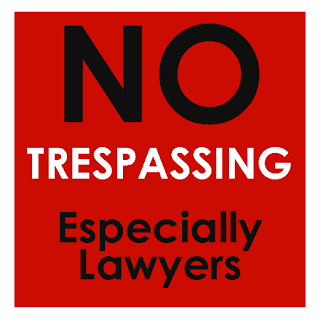 At first, I just didn't have words for this.

This has been going on for a few weeks now and I've been watching in disbelief.

A couple in Boulder has 'claimed an emotional attachment' to about 1/3 of an empty lot next to their home and have filed (and won!) ownership of 1/3 of that land.

From the Denver Post: " Richard McLean and his wife, attorney Edith Stevens, used an arcane common law called "adverse possession" to claim the land for their own."

This lot was purchased by Don and Susie Kirlin in the early 80's. They planned to someday build their dream home on it. When they went to put up a fence around the property, Mr. McLean (and ex-Boulder Judge, apparently) had a restraining order in hand in under 3 hours.

This is goofy stupid. Since when does someone who owns a plot of land for almost 20 years, and lives 200 yards away, LOSE their right to a big chunk (34% apparently) because someone living next to it used that land (trespassing, effectively) and 'grew attached' to it? This made it pretty much impossible for the Kirlin's to build on the land.

This is goofy stupid. Even for Boulder.

I'm not a hard core land rights guy. I like the open space around Boulder. I think there are times when it the greater good of the community outweigh a single individuals desire to hold onto land for the sake of holding on to it, but this is dumb. This is an empty building lot good for one thing: building a house on. There is no greater good at work here, only selfishness and a well connected and legally slick persons ability to manipulate the system for their own personal gain at another persons personal loss.

One thing I would recommend to anyone who owns an empty lot in Boulder: Build a fence around it. Now. I'd also put a sign that said "No Trespassing. And all Ex Judges and Lawyers be warned.. this is my damned land".