What Every Startup Needs: A King Arthur and a Merlin 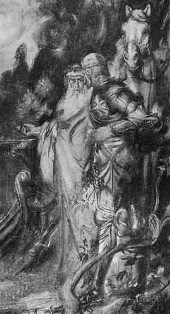 King Arthur or Merlin. Which are you?

I suspect that many if not most successful high tech companies have both as founders. A King Arthur, the front man, the person facing the world and the overall leader, and a Merlin, the magician behind the king who, with Arthur, puts together the magic of the company like products, strategy, teams, vision and council to Arthur.

Think Steve Jobs and Steve Wozniak of Apple, Chad Hurley and Steve Chen of YouTube, and of course, Captain Kirk and Spock of Star Trek (OK, that's a stretch, but you get the idea).

Startups that have both of these archetypes in the early stage mix seem to generally do better than those that don't. Of course, you don't have to have these two, you can start with one or the other, but if you want to truly get both great product and market traction, and do it quickly, you'll be better off if you have both.

So ask yourself: Do you have both? If you don't, and you're a Merlin, get yourself an Arthur. If you're the King already, don't try to do it alone.
at January 07, 2007

Often I feel you need different personalitiles that don't drink from the same cool-aid. They don't have 2 disagree all the time but should be able 2 hold different (often often both valid) opinions.

Find that different upbringings, cultures can help (i.e. non US) - especially when your market is not just US based.

Having the Dr Jekyle/Hyde syndrome yourself is sometimes helpful!

Darn't and my names not Merlin nor Arthur!